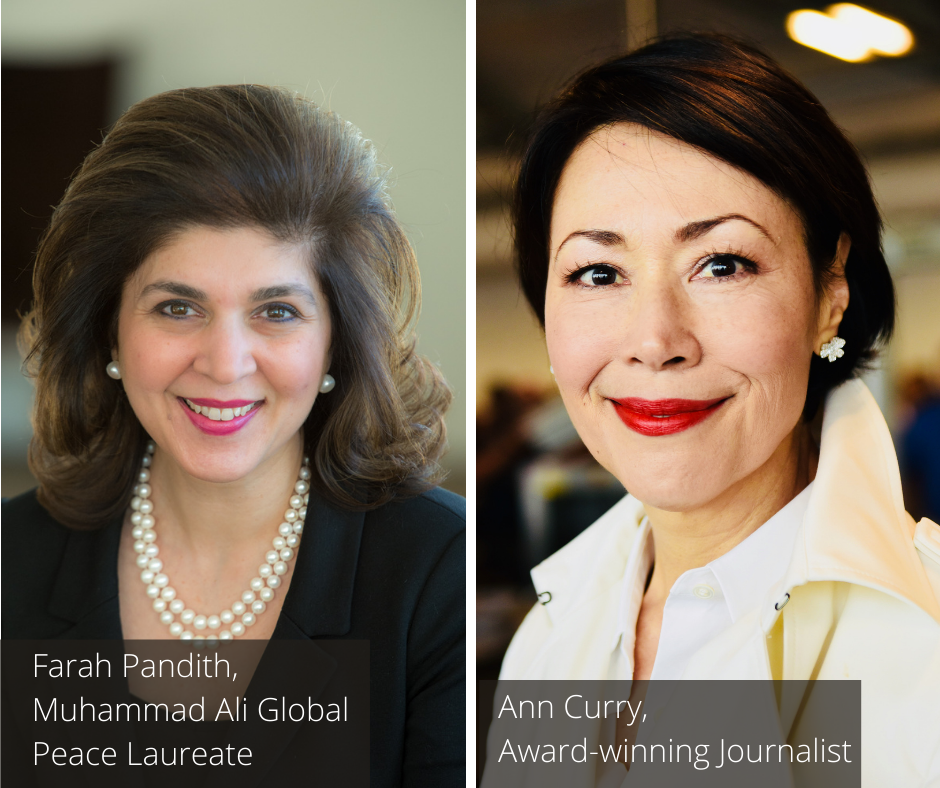 Ann Curry: In the year since your appointment as Global Peace Laureate, many in our world have struggled with disease, acrimony, fear and uncertainty, which are now exacerbated by the aftermath of the war in Afghanistan. How have you begun your work to help move humanity toward peace, and why?

Farah Pandith: This has been a challenging time for countries all over the world. As we have attempted to come together to try to contain the virus we simultaneously have watched in despair as deep divisions tear apart societies over things as diverse as equity, science and the environment. However, it has also been a time of reflection and hope. What can we do together as societies? Are there new ways to look at collaborations? Can we build stronger ties that bind?

A year after the 9/11 attacks, Muhammad Ali took a trip to Afghanistan as a United Nations Messenger of Peace to raise awareness of the country’s needs. He visited a girls’ school, a women’s bakery and a boxing club in Kabul. He raised awareness about the power of compassion and kindness in his visits to UNICEF and World Food Program initiatives. Through his engagement and listening he brought their voices forward.

Over the course of the last twelve months I have been honored to work with partners who share Muhammad Ali’s core principles of confidence, conviction, dedication, giving, respect and spirituality and want to accelerate the humanitarian ideals he encompassed because they have been affected by the dramatic changes you describe. People want to look ahead to a better reality than the one we are facing today.

In seeking out like-minded thinkers I have benefited from their ideas about how to advance these elements across the United States and beyond. For example, through its formal association with the United Nations Global Communications Department, Ali Center’s humanitarian vision is expanded through their Sustainable Development Goals. I think it is instrumental to expand your allies and draw in new advocates for change. Large organizations like the United Nations and the US Department of State or organizations like Global Ties are vital partners in this work.

We can’t do anything big alone – we need partners of all kinds. As a result of these conversations — from gatherings as diverse as university students or NGOs to a roundtable of community leaders hosted by the White House, I have heard imaginative and constructive ideas on how to repair and renew our global communities. It starts with engagement, listening and partnering.

AC: One of your ideas is to launch a commission on civility and compassion with the Muhammad Ali Center, which is in the planning stage.  How effective do you think this commission can actually be given the challenge of our times?

FP: We have to do all we can to activate our communities for good. There are so many destructive forces that have caused our societal sinkholes to be exposed. They are getting bigger and deeper. This doesn’t need to be the norm. Even though it may seem impossible, I have witnessed first-hand what happens when people come together around shared goals. One of those goals is to strengthen our ability to hear one another, to give dignity to all voices, to offer a way to engage that doesn’t have to be violent and angry.

As I reflected on this new American reality I thought about the power of unified voices. Bipartisan voices. Diverse voices. American voices. I reflected on the legacy of Muhammad Ali and the power of his deeds and words. He did not sit back and watch the world around him. His convictions were strong and he believed in who he was.  He had the courage to do the right thing: give dignity to all and treat people as you want to be treated.  I remembered the period of unrest in America when he was gaining professional acclaim – when he won his gold medal in the Olympics he came back to Louisville to a city that was divided along racial lines. He had just won the Gold on behalf of America and yet he could not sit at the same table as a white person. He did not sit back. He went forward and fought for unity.

I think we need to demand more of ourselves as Americans. This is a rough time in our nation. Politics, race, religion, sexuality – name it we are at each other’s throats. It is time to think about solutions. It is time for growth. That time is now.

As a part of the Ali Center, the idea for a playbook that offers constructive ideas on how to build compassion and civility into the human architecture of America came from my belief that we have to do more. We can’t wait. Muhammad Ali would not wait. Why should we?

AC: How will you measure success for this commission?

FP: A successful commission is one that can deliver a report that is actionable, practical and research-based.  It is essential the recommendations provide a roadmap for our nation so that policy makers, business and civil society can get behind the solution-sets. In order to do this we will engage in deep conversations across America to hear and advance their ideas. We will also draw on expertise from a wide group of professionals in the fields of civility and compassion.

I have no doubt that a solution-oriented commission that is credible and respected will be able to deliver a report that will refocus our attention on what is possible to attain more civility and compassion across our great nation.

AC: To what degree are the ideas espoused by Muhammad Ali fueling this effort, and your work as a Global Peace Laureate?

FP: I am deeply humbled by the respect the Ali Center has given me and my work over these many years. His example of sacrifice, courage, determination, kindness, love and resilience has long been in my heart and mind. As a young girl I remember talking to my Uncle about Muhammad Ali, a man he respected deeply. My uncle, who was a thoracic surgeon and very involved in inter-faith work, used to tell me that Muhammad Ali was the best of America and a true Muslim. He pointed out Muhammad Ali’s deep devotion to other humans in how he spoke with them, laughed with them, practiced his faith and related to others. My uncle always told me that he operated on the human heart and held it in his hand. He said there was no difference in the heart of a Jew, Christian, Hindu, Muslim, etc… Muhammad Ali did not show disrespect for people of other faiths. In fact, he made it a point to go to pray at mosques of different kinds.

Thus, at an early age he was a hero for me growing up as an American and as a Muslim.

As I got older I learned more about what he did on issues of social justice, about his spiritual journey and about his generosity to strangers. I became more and more interested in not just the “what” of what he did but the “why”. How was he the person he was in such a chaotic time for a Black man in America? How did he stand by his beliefs so powerfully, so fully? Where did his motivation come from? We see this type of activism in America today and think this is new. It is not. He did this without a Tik Tok or Instagram post to get more likes. He did these things because it was who he was.

His decision to be a conscientious objector to the Vietnam War resulted in horrific backlash, physical danger and losing his hard won heavyweight title. His conversion to Islam was unpopular. Yet he stayed true to himself. These things and more are deeply moving and joyful. One can see what is possible with fearlessness, faith and the desire to build a better world.

He is still a role model for me. I feel obliged to do all I can to make sure that what I do in this role as the Muhammad Ali Global Peace Laureate reminds people of who he was and who they can be. He is a hero for our time and we need to hear his message.

AC: What is your message to people reading this, who feel America has moved too far away from compassion and civility and wonder what they as individuals can do to promote peace?

FP: My message is to look beyond what you think is possible. Find partners. They can be friends, neighbors, local organizations or businesses. There are people around you who want to build a more compassionate and civil environment. Change can happen even if it starts at the micro level – reach out to someone who does not live like you, pray like you, love like you or look like you.

Muhammad Ali’s legacy shows us that the most unexpected people can inspire goodness.