The world is changing fast — every day seems to bring another seismic shift during the COVID-19 crisis. In our “new normal,” with social distancing policies in place, an avalanche of daily news updates and uncertainty about the future, one can feel isolated and powerless.

One important thing, however, has not changed: the importance of community, and doing what we can to give back. In many places, the sense of community is stronger than ever, with people going out of their way to help friends, neighbors and strangers through this difficult time.

Muhammad Ali once said, “Service to others is the rent you pay for your room here on earth.” Dr. Pearse Lyons, Alltech’s founder and recipient of the 2018 Muhammad Ali Humanitarian Award for Lifetime Achievement, has said, “The legacy I would like to leave is, ‘We made a difference.’” For both men, their most important mission was to positively impact others, and the communities in which they lived and worked held special places in their hearts.

In 2009, Dr. Lyons, a native of Ireland, helped arrange Muhammad’s visit to Ennis, Ireland, to retrace the steps of his great-grandfather, Abe Grady. When Muhammad returned to Ennis, he paid homage to the people who came before him and was proclaimed a Freeman of Ennis. He was welcomed by crowds of thousands and people of all ages, including locals welcoming “Ali O’Grady.”

A special moment took place while Muhammad greeted the crowd. He was quick to approach a young man who was in a wheelchair. Dr. Pearse Lyons happened to be wearing a commemorative watch featuring Muhammad, which he suggested Muhammad give to the fan. It was a testament to the strong bonds of community, across both space and time, and how the smallest acts of generosity can often be the most powerful.

Muhammad and Dr. Lyons were both men of courage and strength who found their greatest joy in elevating others. Their legacies are a reminder that we, too, can make a difference in our communities through small acts of kindness. At this time especially, one of Muhammad’s quotes says it best: 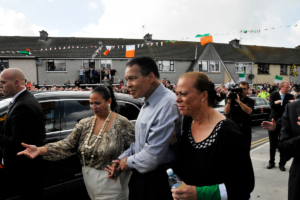 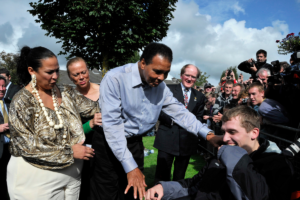 Your ticket for: “Don’t count the days — make the days count” with small acts of kindness