‘Champion of Service: Celebrating Muhammad Ali’ to feature reflections from individuals close to the late world heavyweight champion and humanitarian and an opportunity for viewers across the country to participate in The Greatest Giveback 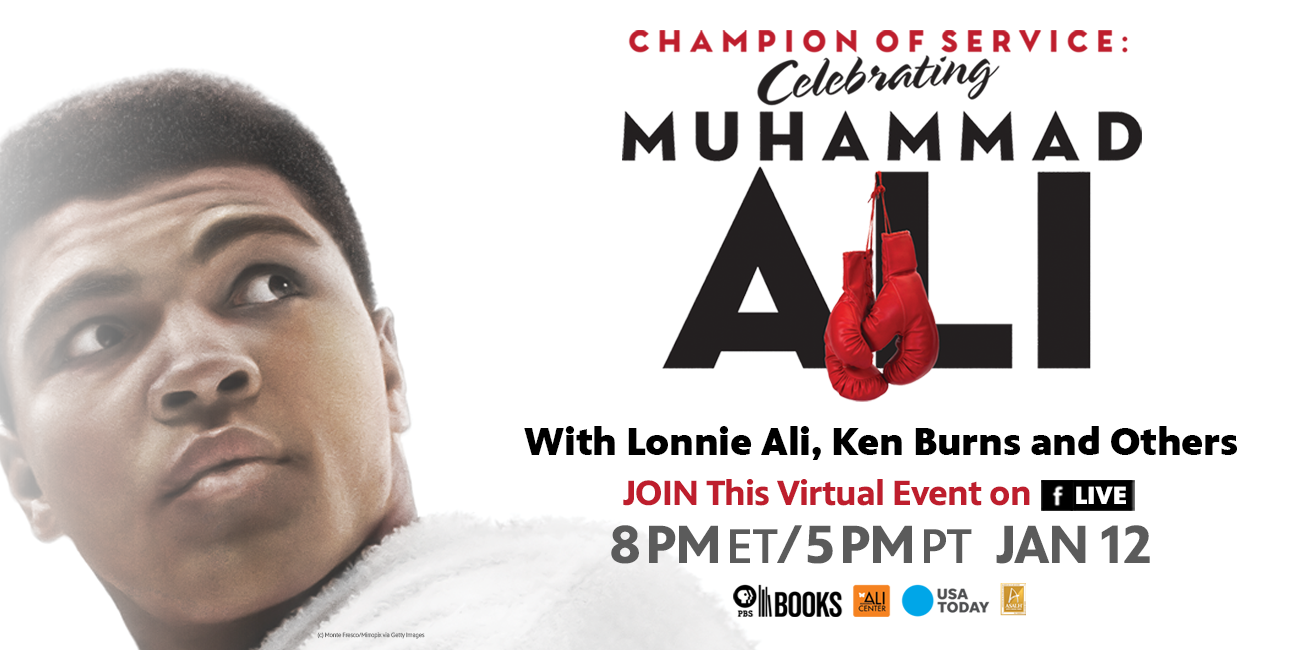 Although Muhammad Ali is universally revered as The Greatest of All Time (or G.O.A.T.) for his exploits in the boxing ring, he also became a champion for humanity through his commitment to service outside the ring.

The full life and legacy of this global icon will be celebrated in a national virtual event at 8 p.m. ET on Wednesday, January 12, 2022, on the PBS Books Facebook page.

Through a partnership led by PBS Books, USA TODAY and the Muhammad Ali Center in Louisville, the evening’s program will highlight the dedication to courage, generosity, kindness and compassion embodied by Muhammad Ali in recognition of his 80th birthday on January 17. Additional partners include the Louisville Courier Journal, Metro Louisville United Way, the Association for the Study of African American Life and History (ASALH) and Kentucky Educational Television (KET).

His widow, and vice chair and co-founder of the Ali Center, Lonnie Ali, will introduce the one-hour event. Guest speakers will include PBS filmmaker Ken Burns; Hana Ali, Muhammad Ali’s daughter; John Ramsey, a personal friend; David Chaudoir, a longtime employee; and Dr. Richard Lapchick, who is a human rights activist, author, scholar and the 2021 Muhammad Ali Humanitarian of the Year Award recipient. Each participant will draw upon their personal experiences with Muhammad and share their own unique perspectives on his life and legacy as a humanitarian.

Along with learning more about the unique contributions Muhammad Ali made in sports and society, this national virtual program will also encourage others to participate in The Greatest Giveback through service projects across the country, which are organized each year on January 17, Ali’s birthday. Due to recent COVID spikes, the on-site event at the Ali Center has been postponed until June. In 2022, Muhammad’s birthday coincides with Dr. Martin Luther King, Jr. Day, offering another opportunity to give back to those in our own communities who are suffering racial or social injustices.

The virtual program will include a short video about the Ali Center and Ken Burns sharing some inspirational comments and a segment from his PBS documentary, “Muhammad Ali.” In addition, inspirational authors and celebrities will explain what Ali’s legacy means to them and reveal their personal Red Bike Moment© – a defining moment in their lives, much like the one that changed the future of then 12-year-old Cassius Clay when his red Schwinn bike was stolen, an incident that led him to a Louisville boxing gym and which became a catalyst for his athletic career and life’s purpose.