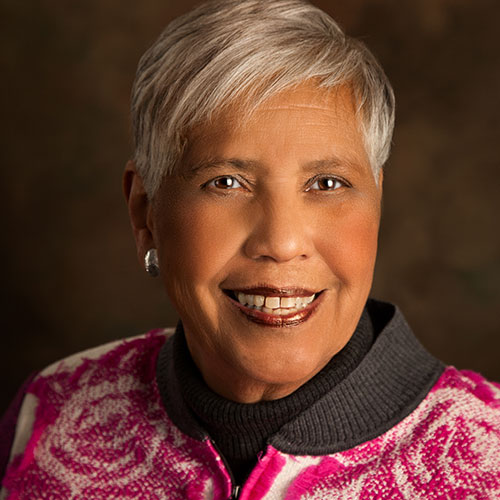 Join the Ali Center in welcoming this month’s Daughter of Greatness, Alice Houston.

Alice K. Houston graduated from the Louisville public school system in 1964.  She received her diploma from Baldwin Wallace College in 1968; and she attended Vanderbilt University on a Danforth Foundation Fellowship in Latin American History. Alice left Vanderbilt in 1969 to marry Wade Houston. The two lived in France, where her husband played and coached basketball in Strasbourg.

Upon returning to the United States, Alice began a long and successful association and career at the University of Louisville. She left the university in 1988 to join a series of family businesses, which collectively became the second largest minority-owned company in the United States, and the largest minority-owned transportation company in North America. In 2001, Alice divested of her interests to concentrate her attention to developing HJI Supply Chain Solutions. She became President and CEO in 2005.  During the ensuing years, HJI became a preferred supplier of material fulfillment, sequencing, assembling, and logistic services, and won the 2011 TSMSDC “Supplier of the Year Award”.

Aside from her business interests, Alice enjoys working in the community. She is a former member of the Board of Directors of the National Urban League, a past Chair of Greater Louisville, Inc., and was honored as Louisvillian of the Year in 2008. She currently serves on the following boards: Federal Reserve Bank of St. Louis, 55,000 Degrees and 15K Degree Initiative, Simmons College of Kentucky, Louisville Arena Authority, the James Graham Brown Foundation,   Transit Authority of River City (TARC), Greater Louisville Project, University of Louisville Foundation,  and Greater Louisville Inc. Alice is a member of Delta Sigma Theta Sorority, LINKS, Inc., Girl Friends, Inc., and a Trustee at Green Castle Baptist Church. Of all her activities, however, she is most proud of being married to Wade, and being the mother of Allan, Lynn, Natalie, and “Mema” to her fifteen grandchildren.

Your ticket for: Daughters of Greatness: Alice Houston