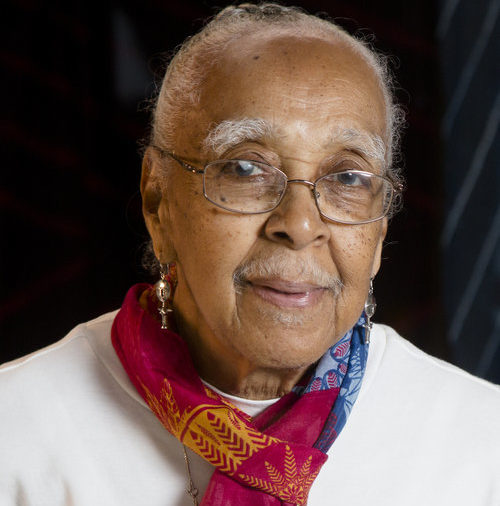 Elmer Lucille Allen has been known for her volunteer service to the artistic community since  the early 80s.  A native of Louisville, Kentucky, who graduated from Central High School (1949), Nazareth College, now Spalding University (Bachelor of Science, 1953) and University of Louisville (Masters of Studio Arts, 2002).

Pursued a career in art after working as a chemist for 31 years. She retired in 1997 as a Senior Analytical Chemist from Brown-Forman. She took her first ceramic class in 1977. However, in 1981, she was encouraged to take ceramic classes at the University of Louisville with Thomas Marsh.  And in 2000 she decided to pursue a masters in ceramics under Virginia Marsh but had to take a second studio art class. She chose fiber arts and studied under Lida Gordon. In 2002 she received a Masters of Art in Studio Arts. Her thesis exhibition consisted of over 200 reduction-fired sculptural porcelain boxes and stenciled wall hangings.

In the fiber arts class she was introduced to multiple fiber techniques but the one technique that spiked her interest the most was the stitched resist shibori. She has had several exhibitions where she has exhibited both ceramics and shibori art works.

In the 1980s, she was the president of the Kentucky Coalition for AFRO-American Arts, Inc. This organization received a grant from the Kentucky Arts Council to document African American artists in the Commonwealth of Kentucky. And in 1986 she was awarded the Governor’s Community Arts Awards for contributions to the arts in the Commonwealth of Kentucky.  Nancy Gall-Clayton wrote a play about her.

2018 was a phenomenal year for her. She received five awards for her contribution to the arts and to the community as a whole. She was the curator/director of Wayside Christian Mission’s Wayside Expression Gallery for twelve years (2005-2017).  In 2015 she received the Kentucky Museum of Arts and Craft’s Art and Advocacy Award. Was the recipient of the2011 Spalding University’s Caritas Medal  - Highest Alumnus Award.

Several authors have written about her. Two books in particular are – Portraits of Grace written by Marian T. Call with original art by Joan Zehnder (2007); and Kentucky Women: Two Centuries of Indomitable Spirit and Vision edited by Eugenia K. Potter (1997).

Loves to be involved in the arts community; attends workshops and/or conferences that are art related whenever possible; and attends art openings/receptions in order to meet the artist or artists. She loves taking photographs of artists with their art work. Art is an integral part of her life. In addition, to the arts she is interested and attends meetings on issues that affect others within Metro Louisville. She is a lifelong learner.

Your ticket for: Daughters of Greatness: Elmer Lucille Allen