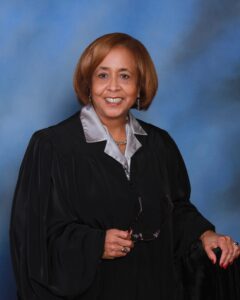 Judge Denise Clayton became the first black woman to serve on the Kentucky Court of Appeals in October 2007. She serves the 4th Appellate District, Division 2. Prior to her appointment and election to the Court of Appeals, Judge Clayton was chief circuit judge for Jefferson County, where she had been a circuit judge for nearly seven years. She was the first black woman to be a Kentucky Circuit Court judge. She was also chief regional circuit judge for the Metro Region for several months before serving on the Court of Appeals. Judge Clayton previously served in Jefferson County as a judge for District Court, Family Court and Drug Court. She is the chairwoman for the Chief Justice’s Commission on Racial Fairness for Jefferson County’s courts and is a member of the Louisville Bar Association, Louisville Black Lawyers Association, and Women Lawyers Association. She has also served on several community and civic boards.​

Among her awards, Judge Clayton was selected as the 2012 recipient of the Distinguished Judge Award by the Kentucky Bar Association. Judge Clayton has also received the Public Advocate Award from the state’s Department of Public Advocacy, the Distinguished Alumna Award from Brandeis School of Law, the Alumni Achievement Award from Defiance College, the Community Service Award from the Optimist Club of Louisville, the Louisville Bar Association Justice William E. McAnulty, Jr. Trailblazer Award, the Louisville Chapter NAACP Meritorious Service Award, the “Interesting Personality” Award from Who’s Who in Black Louisville, the Champion for Children Award from Shawnee High School in Louisville.

COVID-Health and Safety Measures: To maintain the safety of our event, all guests and staff must wear masks over their nose and mouth unless eating or drinking. Upon arrival, all guests must present proof of COVID-19 vaccination (digital or card-copy) or negative results from a PCR test taken no more than 3 days prior to the event. Please be prepared to show verification of vaccine or test when you arrive. Event capacity will be limited. Please reserve your tickets today!

Your ticket for: Daughters of Greatness: Judge Denise Clayton