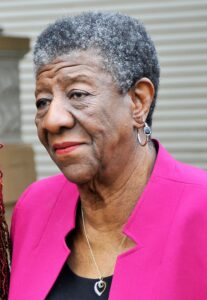 Mattie Jones is a nationally renowned civil rights and social justice activist.  A native of Memphis, Tenn., Jones moved with her family to Louisville as a child, after her father took a job at the Quartermaster Depot in Jeffersonville. Jones’ public activism began not long after her graduation from Central High School in 1951. She attended Indiana University but says she quickly decided it was not safe or welcoming for black students, so she transferred to the University of Louisville, which had recently desegregated its main campus. But after being denied a work study position and being told white co-eds would not accept working alongside her, Jones left college and joined the Black Workers Coalition to fight for equality in employment.

In over six decades of activism since, Jones has organized countless demonstrations, public conversations, and boycotts focused on women’s and worker’s rights, environmental justice, peace and police/community relations. She was a founding member of the National Alliance Against Racist and Political Repression and has helped lead and staff numerous local and national justice operations during her long career.

To register for Mattie Jones’s Daughters of Greatness event: https://19291.blackbaudhosting.com/19291/Daughters-of-Greatness-honoring-Mattie-Jones

Your ticket for the: Daughters of Greatness: Mattie Jones