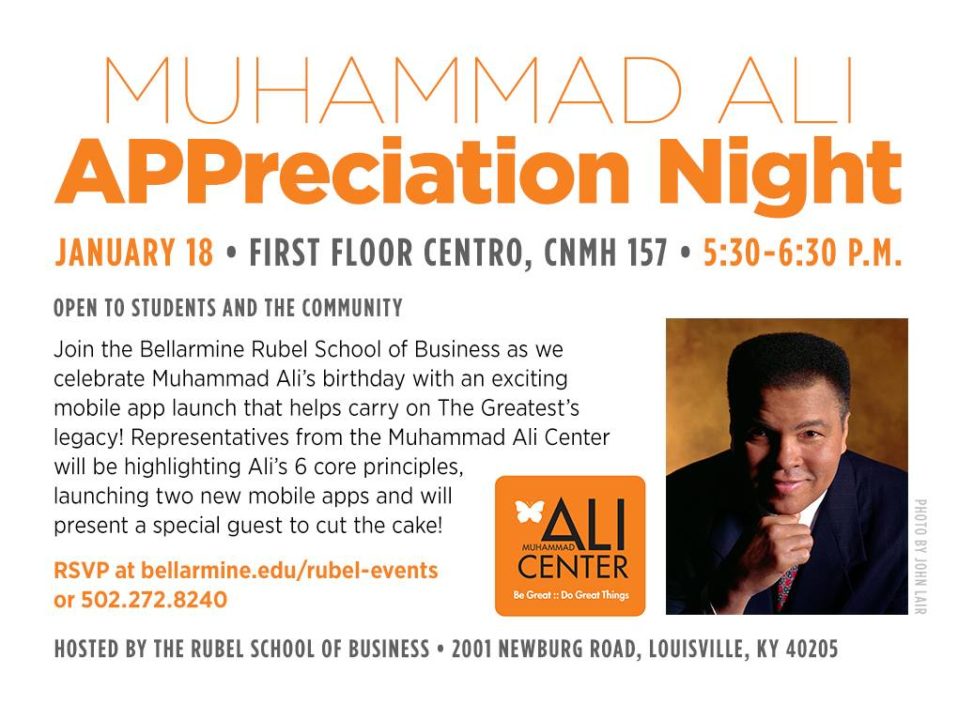 NOTE: This Event is at Bellarmine University

Bellarmine University’s Rubel School of Business and the Muhammad Ali Center are celebrating Muhammad Ali’s birthday with a Muhammad Ali APPreciation Night on Thursday, January 18th from 5:30-6:30 p.m. in Bellarmine University’s Centro Building. During the APPreciation Night, the Center, along with Rasheda Ali-Walsh and Jamillah Ali-Joyce, Muhammad Ali’s twin daughters, will help launch two new mobile apps focused on continuing the Champ’s legacy of service. There will also be a birthday cake and drawings.

January 17th marks what would have been Muhammad Ali’s 76th birthday. He passed away on June 3, 2016.

The two new mobile apps, called “Generation Ali” and “Hours Against Hate,” are specifically designed to promote and preserve Muhammad Ali’s legacy, and especially to actively engage young people in service to and respect for others.

In attendance will be Donald Lassere, President and CEO of the Ali Center, Dr. Susan M. Donovan, President of Bellarmine University, Rasheda and Jamillah, among others.

“Muhammad Ali used his athletic prowess and his enormous personality to advance an idea of what human greatness really is – confidence, conviction, dedication, respect, giving and spirituality,” said Dr. Donovan. “We are honored to host this night celebrating what would have been the week of his 76th birthday. Students and the community will not only have the opportunity to learn more about Muhammad Ali’s legacy, but also to see what incredible things The Muhammad Ali Center is doing.”

The APPreciation Night is free and open to the public, but RSVPs are encouraged here. It will be held on the first floor of the Centro building, located at 2001 Newburg Rd.

Your ticket for: Muhammad Ali APPreciation Night with Bellarmine University