Legendary Host Dick Cavett and Director Robert Bader to attend Special Screening of Ali & Cavett: The Tale of the Tapes on February 8th At the Muhammad Ali Center

Film to Air on HBO Documentary Films on February 11th

HBO Documentary Films is pleased to bring Ali & Cavett: The Tale of the Tapes to the Muhammad Ali Center for a special screening hosted by legendary television talk show host Dick Cavett; Director Robert S. Bader; and the Ali Center, in advance of the film’s premiere on HBO on February 11th. The screening will take place on Saturday, February 8th at 2:00 p.m. in the Center’s Auditorium. Doors open at 1:15 p.m. Mr. Cavett, who, as a talk show host, was notable for his conversational style and in-depth discussions, and Mr. Bader, will both participate in a Q&A after the screening. Light refreshments will be served and photo opportunities will be available.

The documentary follows the life and times of Muhammad Ali shown through the lens of his many appearances on the Emmy-winning The Dick Cavett Show. Ali was a guest on the show multiple times between 1968 and 1979 and used these appearances as opportunities to have candid conversations with the host about racial, religious, and political injustice. The film features interviews with Dick Cavett, Rev. Al Sharpton, HBO World Championship Boxing commentator Larry Merchant, Ali biographer Thomas Hauser, columnist Juan Williams, author Ilyasah Shabazz, and more, as well as archival material from The Dick Cavett Show.

“I grew up admiring these two great men, without any real knowledge of how deeply their lives intersected both on television screens and in private,” said Robert Bader, Director of the film. “Along with HBO Documentary Films, I’m pleased to bring this film back to the Muhammad Ali Center in advance of its premiere.”

“Anyone who watched The Dick Cavett Show will remember the magic of Muhammad’s appearances on the program,” said Donald Lassere, President and CEO of the Ali Center, “especially the frank discussions they had about politics and society. We are honored to show this film during Black History Month and to have Dick and Robert sitting in the audience.”

Formerly a stand-up comedian and Tonight Show writer, Dick Cavett was given his own daily talk show in the spring of 1968. The first show he taped featured Muhammad Ali, and he would appear on Cavett’s show a total of fourteen times. Ali and Cavett’s friendship spanned more than fifty years.

Dick Cavett said, “It is fitting that the film will be screened at the Ali Center in my dear friend’s hometown. Robert and I look forward to hosting the event and answering questions following the screening.”

Suggested donations to attend this event are available online at alicenter.org and will also be accepted at the door: $15 per person for film screening; or $30 per person for the screening and a film poster autographed by Mr. Cavett.

Seating will be on a first come, first served basis. 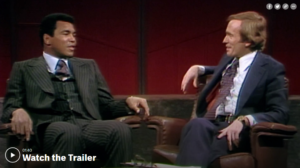 Your ticket for: Legendary Host Dick Cavett and Director Robert Bader to attend Special Screening of Ali & Cavett: The Tale of the Tapes on February 8th At the Muhammad Ali Center

Legendary Host Dick Cavett and Director Robert Bader to attend Special Screening of Ali & Cavett: The Tale of the Tapes on February 8th At the Muhammad Ali Center