Monday, October 28 from 4PM to 5:30PM | Speaker: Homeless for the Coalition Louisville and other local community organizations

Participants will learn about statistics on the homeless population within JCPS and surrounding area, as well as receive resources in working with students experiencing homelessness, and be exposed to community organizations that are working to address this issue.

About the Homeless for the Coalition Louisville: mission to advocate for people who are homeless and for the prevention and elimination of homelessness.

In response to Moore Traditional High School students’ letter to Kentucky State legislators, State Representative Attica Scott has prefiled KY House Bill 27. In its current state, the bill proposes the inclusion of African Civilizations and Native American Civilizations into the curriculum at the Elementary School level as well as Middle and High School. A group of educators and Black History Matters campaign founder, Taylor Little, a duPont Manual graduate have come together to consider what Professional Development could be done for JCPS teachers while bill is being considered.

We are hopeful that our community’s vast resources and expertise will be a beginning toward reaching Louisville students with this essential component of community and self. ALL children will benefit from what is share in these Professional Development offerings. It is our intention that teachers be provided with the resources they need to ensure that all our children are educated about all our children’s ancestry and glory.

Topic: Inclusion. How do we best design spaces FOR the children in our classrooms?
Often inclusion practices are thought of as a way to “add -in” to our teaching as it exists. But what if we began by making the spaces FOR children rather than stirring them into the mix of what we already have? This workshop will look at the subject of representation and inclusion, discuss new ways of approaching classroom and lesson design, as well as provide practical materials and take-aways for daily use.

REAL BOY is an intimate story of a family in transition. As 19-year-old Bennett Wallace navigates early sobriety, late adolescence, and the evolution of his gender identity, his mother makes her own transformation from resistance to acceptance of her trans son. Along the way, both mother and son find support in their communities, reminding us that families are not only given, but chosen.

Monday, October 30 from 3:30PM to 5PM | Film: A Time for Justice | Speaker: Tracy K Meyer, Author of Civil Rights in the Gateway to the South

In A Time for Justice, four-time Academy Award-winning filmmaker Charles Guggenheim captured the spirit of the civil rights movement through historical footage and the voices of those who participated in the struggle. Narrated by Julian Bond and featuring John Lewis, the 38-minute film allows today’s generation of students to witness firsthand the movement’s most dramatic moments—the bus boycott in Montgomery, the school crisis in Little Rock, the violence in Birmingham and the triumphant 1965 march for voting rights.

Civil Rights in the Gateway to the South: Situated on the banks of the Ohio River, Louisville, Kentucky, represents a cultural and geographical intersection of North and South. Throughout its history, Louisville has simultaneously displayed northern and southern characteristics in its race relations. In their struggles against racial injustice in the mid-twentieth century, activists in Louisville crossed racial, economic, and political dividing lines to form a wide array of alliances not seen in other cities of its size. In Civil Rights in the Gateway to the South: Louisville, Kentucky, 1945–1980, noted historian Tracy E. K'Meyer provides the first comprehensive look at the distinctive elements of Louisville's civil rights movement. K'Meyer frames her groundbreaking analysis by defining a border as a space where historical patterns and social concerns overlap. From this vantage point, she argues that broad coalitions of Louisvillians waged long-term, interconnected battles during the city's civil rights movement. K'Meyer shows that Louisville's border city dynamics influenced both its racial tensions and its citizens' approaches to change. Unlike African Americans in southern cities, Louisville's black citizens did not face entrenched restrictions against voting and other forms of civic engagement. Louisville schools were integrated relatively peacefully in 1956, long before their counterparts in the Deep South. However, the city bore the marks of Jim Crow segregation in public accommodations until the 1960s. Louisville joined other southern cities that were feeling the heat of racial tensions, primarily during open housing and busing conflicts (more commonly seen in the North) in the late 1960s and 1970s. In response to Louisville's unique blend of racial problems, activists employed northern models of voter mobilization and lobbying, as well as methods of civil disobedience usually seen in the South. They crossed traditional barriers between the movements for racial and economic justice to unite in common action. Borrowing tactics from their neighbors to the north and south, Louisville citizens merged their concerns and consolidated their efforts to increase justice and fairness in their border city. By examining this unique convergence of activist methods, Civil Rights in the Gateway to the South provides a better understanding of the circumstances that unified the movement across regional boundaries.

Autism in Love follows the story of four adults with an autism spectrum disorder as they search for and manage romantic relationships.  These heartbreaking and brace individuals round up the ensemble cast of Autism in Love as they take audiences on a journey that urges them to question and reevaluate their own ideals of what it means to love and be loved.

Wednesday, February 5 – repeat session of A Time for Justice 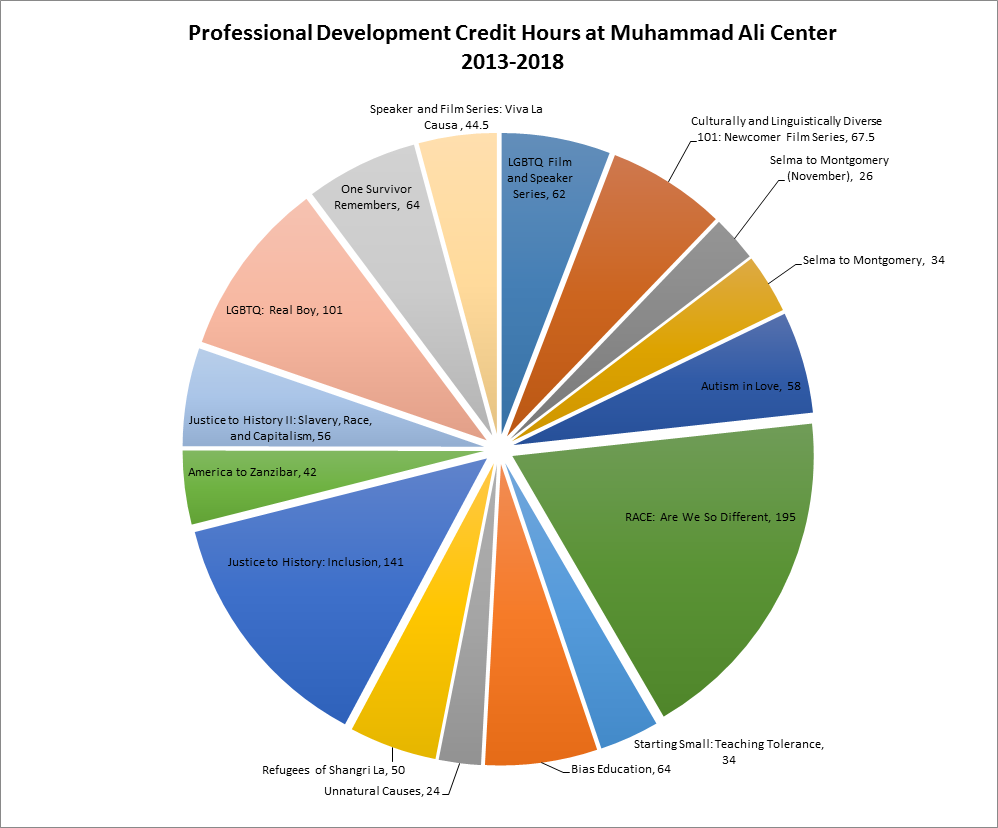 The Muhammad Ali Center is an ally to schools and organizations in advancing education, inclusion, and equity through unique professional development programs. Set in the immersive learning environment of the Muhammad Ali Center, participants are challenged to examine social justice in both historic and contemporary contexts, confront all forms of prejudice and discrimination, and assume responsibility for positive change. We provide interactive, experiential programs that help educators and organizational leaders to fulfill their potential both as people and professionals.

Your ticket for the: Professional Development